IAB introduces in its range of special products a number of developments in R&D based on microbial biological control, either directly or indirectly, of the major diseases of our crops. These special products are focused on plant health and, by their nature, are offered as flagship products, to be developed through collaborations and confidentiality agreements between those applicant companies to work together. The registration process is established according to EC Regulation 1007/2009. 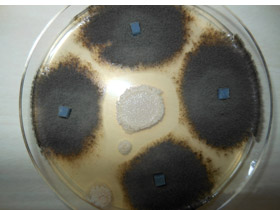 The strain IABBS03, a unique strain of Bacillus subtillis ssp subtilis, demonstrates its singularity because of analysis of the presence of marker genes by PCR using specific primers as well as its genetic profile. The exceptional characteristics of the strain IABBS03 have made the annex I inclusion project possible according to directive 1107/2009, for use as a biological control agent of plant protection use.

Through numerous GEP efficacy trials conducted in Europe and USA, the strain IABBS03 demonstrates its skill as a versatile weapon for biological control of fungal and bacterial diseases in different pathosystems, always reducing the incidence and severity of the disease which has been treated. GEP effectiveness trials performed have shown that the strain and its experimental formula may be assigned to the following uses: powdery mildew in cucurbits, lettuce downy mildew, venturia inaequalis in apples, botrytis cinerea and powdery mildew in vineyards, moniliasis in stone fruits, botrytis cinerea and bacteriosis in Solanaceae such as tomato, and potato blight. 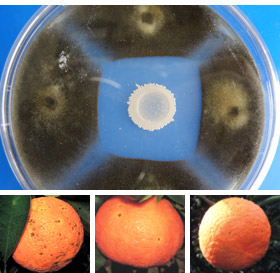 It is a solid product that has a minimum of 1010 cfu/g of a mixture of microorganisms selected because they are natural antagonists of pathogenic fungi and specifically Alternaria in citrus. Besides being excellent colonizers of aerial parts of plants to take preventive and curative against this fungal pathogen on the surface of leaves, flowers and citrus fruits.

They are natural strains isolated by IAB, not modified by genetic engineering and deposited with restricted use in the Spanish Type Culture Collection under the number: 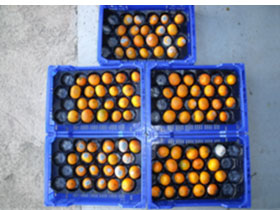 It is a solid product that has a minimum of 109 cfu/g (units forming colonies per gram) of a bacterium selected by IAB having antagonistic properties of fungal that alter postharvest products, and in particular, Penicillium. Besides being a good colonizer of the surface of fruits and vegetables in pre and post conditions, in no case it is phytotoxic or leaves apparent residue on the surface if used at the recommended dose. Its effect is predominantly preventive against this type of fungus.

They are natural strains isolated by IAB, not modified by genetic engineering and deposited with restricted use in the Spanish Type Culture Collection under the number: